Actually, I am an author and a street worker. But sometimes, when I have time and energy, I go to the Refugee Reception Camp in Moabit in order to volunteer. Berlin is very good to me. And I would like to pay back this way.

Mostly, I translate in the reception Camp from German to Arabic. And mostly they are Syrians who ask for my help in seeking asylum there. In the beginning it’s very difficult to listen to all these people, to watch their fate. Some days, my frustration and sadness is preventing me from sleeping.  Just as of late, I try to go there more and more often, in order to somehow be of help to these people.

The deciding moment for my journey today to the autonomous Camp in Calais is the day when, together with a friend of mine, I pick up around 40 refugees living on the street. They don’t have anywhere to stay. Many of them have been sleeping on the streets for a couple of nights. I know this situation from my own experience. And that’s why I would not wish that on anybody in this world. Least of all those who had to escape a war. In these people’s stories, every sentence hides the devil. All forms of violence, physical damage and torture are only the beginning of every story. The stories of the children are the worst.

Sometimes, there is space in the air domes of Moabit. On that day, this is where I bring all the men and women. On the footpath to the halls, it occurs to me that some of the people don’t carry anything with them, other than the clothes on their backs. I had really only planned on taking these people there and then leaving again. The people in the Reception Camps are very friendly and would take care of their new guests excellently. But there has long been a connection established between myself and these people. Seven hours later, everyone has had something to eat, and a bed  as long as the ministry of health and social affairs has agreed to carry costs for. They are all holding the necessary documents in their hands as proof. Just before midnight, I say good night and walk towards the exit in order to leave the hall. One of the men follows me, in order to give me something to take home with me.

“Brother, why are you doing this? Why are you helping us? I want to thank you again, on behalf of the whole group. “

I really like this, very much. Following this encounter, I try to find ways to help the people who had to escape, even more effectively. Some weeks later I come across an article on facebook, published by a French newspaper, about the autonomous Camp in Calais. I learn that currently, around 4000 Escaped from all around the world live in the Camp. Men, women and children have built their own township there. A Church, a Mosque, a supermarket, hairdresser, sanitary facilities, a football pitch – all of this, the people set up there by themselves.

Pure autonomous action. I have always been fascinated by this. As a child, it’s really good fun. In reality, it is deeply serious business.

I want to leave for there, now. As quickly as possible. And I want to report back to you here, you readers, and tell my friends, too. I believe that knowing mankind and its stories initiates our own engagement, becoming active, as Stephane Hessel formulated. Some will be inspired to volunteer. And others may even stop being Nazis when they hear stories like this.

I express my intentions publically on facebook. Nothing much comes of it. As a helper, I have a female songstress in tow. She travels from Stuttgart to Essen. This is where we meet in order to travel to Calais together. Somehow we also want to gather donated items of clothing so we can distribute them on site.

My neighbours donated a football and an electric shaver. The charity ‘Aktion Europa’ has transferred 600 Euro via Western Union. I am supposed to take 500 Euro from this to buy rice locally and distribute to the poor. 100 Euro I am meant to keep for my travelling cost. It’s clear to me that none of these things will move mountains, but I promise myself that my visit to this place will not have been in vain. For those who know me, know that I will do something there that will make me achieve my goal.  My goal is attention. Not for me, but for all those who had to leave their home countries only to come and live in a dirty hovel of a Camp and meet a mob of Xenophobes. Believe me, I know what I’m talking about: Nobody leaves their home voluntarily. 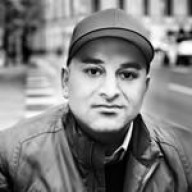